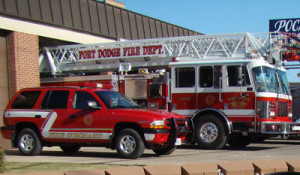 The Fort Dodge fire chief has released some more details on a fatal fire on the north side of the city just before 1 p.m. Sunday.

Chief Kent Hulett says there were seven people in the home when the fire was discovered. “Police were on the scene before us, had four victims outside the house with burn and smoke inhalation injuries,” Hulett says. He says there was a massive amount of fire and smoke that they had to knock down before they could get into the home.

Once they got into the home, they found the other three residents. “Upon searching the second floor we found three deceased victims, a 25-year-old mother with 6-month-old infant and 5-year-old found in a bedroom on the second floor,” Hulett says. The victims have been identified as 25-year-old Amy Devlin and her six-month-old son Bryce, along with five-year-old Joseph Kennedy.

Some reports have said the 5-year-old went back into the fire after first getting out. “That’s just speculation, keep in mind this is a very active investigation with the State Fire Marshal’s office, the police, our fire marshal and the county attorney. We are still talking to witnesses. Keep in mind we have several victims in the burn unit in Iowa City, we’re talking to people who called 911, looking at video, and I can’t confirm that,” according to Chief Hulett.

Hulett says the identities and conditions of the four people who escaped the fire are not yet available. Heavy winds could have been part of the reason the two-story home burned so quickly. “We don’t know at what time they discovered the fire, if there was any attempt to try to extinguish it. When they left the building — did they leave the doors open — obviously there was a fairly strong wind. Keep in mind there’s combustible asphalt shingles on the siding that contributed to the amount of fire,” Hulett says. “Obviously we had a fairly extensive fire before we even arrived on the scene.”

Hulett says it is the first fatal fire he has dealt with since becoming chief about a year-and-a-half ago. “I believe that it’s been a number of years since we’ve had a fatal fire in Fort Dodge,” Hulett says. He says the Fort Dodge community will remember the victims tonight. “There is going to be a candlelight vigil at six o’clock tonight at the site of the fire by family and friends,” Hulett explains. “I drove by a little while ago and I’ve noticed there are three crosses in the front yard with some flowers and teddy bears.”