You are here: Home / News / Bill to ban sales of powdered alcohol in Iowa advances 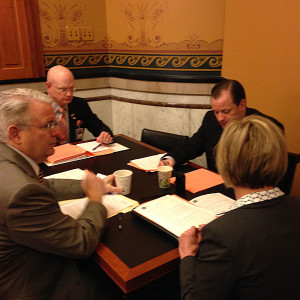 Stephanie Strauss of the Iowa Alcoholic Beverages Commission testifies before a House subcommittee.

A bill to ban powdered alcohol in Iowa has cleared its first hurdle in the Iowa House.

Stephanie Strauss of the Iowa Alcoholic Beverages Commission said the bill would prohibit bars and retailers in the state that are licensed to sell alcohol from selling “Palcohol”  — a product developed by a company based in Phoenix, Arizona.

“This is an emerging issue,” Strauss said this morning. “Last year about this time a product was approved at the federal level for sale in the United States and then that approval was quickly reversed. Since that time, states have been deciding how they want to regulate this new product.”

Palcohol is not available anywhere today. A handful of states have already banned it and Iowa is among 17 other states where legislation is pending to prohibit the sale of powdered alcohol. Representative Ken Rizer, a Republican from Cedar Rapids, led the subcommittee that reviewed the issue this morning.

“I want to commend…the Alcoholic Beverages Division for having your finger on the pulse of trends across the United States and by taking timely action to protect all Iowans,” Rizer said.

Supporters of the ban say the product could be mixed with alcohol rather than water or juice, creating a very intoxicating brew, plus — since it’s powdered — some will be tempted to try to snort it. Representative Steven Holt, a Republican from Denison, was one of three members of a House subcommittee who endorsed the Palcohol ban early this morning.

“Normally, I’m an individual who believes the less government the better, but I just see so many opportunities for abuse of this product and safety from the standpoint of our young people that I’m supportive of this bill,” Holt said.

Representative John Forbes, a Democrat from Urbandale, was the third member of the subcommittee. “The problem you run into with products like this is you can mix it into different concentrations and especially with younger children it can be more easily concealed and taken into schools and put into soft drinks and things like that,” Forbes said.

The bill is scheduled to be considered in the House Commerce Committee this week.

Mark Phillips — the creator of Palcohol – has posted a video on his company’s website, calling critics of the product “completely ignorant.” Phillips argues Palcohol “would be painful” to snort because of the alcohol content. And Phillips said each four-inch-by-six-inch packet contains one-shot of vodka or rum in powdered form — something he said will be “perfect” for campers, hikers and travelers who will be able to pack the lightweight powdered form of alcohol rather than cart around heavier liquid forms of alcohol.

Critics, however, point to the way Phillips touts Palcohol as a light weight alternative to liquid alcohol, saying the sale of Palcohol would add to the “convenience-store approach” to getting high.