You are here: Home / Agriculture / Charles City company cleared to use drones for ag projects 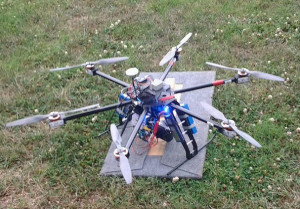 A north-central Iowa company is the first in the Midwest and one of only three nationwide to be granted a federal exemption to use drones for precision agriculture projects.

“Right now you have to walk through the field to see how the plants are growing or they could use satellite imagery, which could take up to a week to get,” Menke says. He says using these drones, they can fly a field in 20 minutes and immediately download images and piece together a map in minutes or a day depending on the size of the field. Menke says the use of a drone can help a farmer make quicker decisions on what needs to be done in the field.

He says they can see if a section of a field needs more fertilizer or is too wet. He says speed is the key to pinpoint problems for farmers to correct. Menke says other companies may tout they can use drones to scout fields but he says Viafield is the first in the Midwest that’s authorized.

“We’re the first agricultural company that I know of that has this type of service and is able to provide these services legally, so we’re making sure we do everything right,” according to Menke.

Viafield is currently cleared to use the fixed-wing style UAV but has also petitioned the FAA to use a quadcopter style of drone.