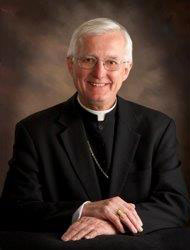 The state’s four Catholic Bishops were at the statehouse early today, lobbying legislators on a few key issues. Bishop Martin Amos of the Davenport Diocese said raising the minimum wage is a fairness issue, because those who work 40 hours a week and are paid the minimum wage can’t make ends meet.

“I just think it should be raised somewhere and since we’re in this building, I think we’d better start with the state,” Amos said.

“I’m so proud of Walmart that took a big step,” Nickless said. “I mean nobody seems to be stepping up to the plate and we need to be doing the best we can to help our people and that would help so much.”

Minimum wage workers at Walmart will be paid $9 an hour, starting April 1 and a year from now the retailer’s own minimum wage will rise to $10 an hour. The state’s Catholic bishops are also urging legislators to pass a bill that would require a woman to have an ultrasound at least 24 hours before a scheduled abortion. Nickless, the Catholic bishop from Sioux City, said that bill’s a priority for the bishops, too.

“When a young parent sees an actual picture of the baby in the mother’s womb, that makes a huge difference and it’s been proven again and again,” Nickless said.

The bishops are also lobbying for more money for the state’s private schools. For the past few years they’ve been advocating the idea of “education savings accounts” which would see the state give the parents of school-aged children in Iowa a voucher which they could use to cover tuition at the private school of their choice or use to finance homeschooling. Bishop Richard Pates of the Des Moines Catholic Diocese said he supports public schools, too.

“But sometimes when they have a little competition, that’s not all bad either,” Pates said.

Critics of the move say it would undermine the public school system and send vast amounts of tax money to private institutions that are not accountable to the public.

The bishop from Sioux City delivered the opening prayers in both the Iowa House and Senate this morning. The state’s top-ranking Catholic official is Archbishop Michael Owen Jackels was briefly at the statehouse this morning, but had to leave by eight a.m. to attend the funeral of a priest in the Dubuque Archdiocese. There are over 450 Catholic parishes in Iowa where about half a million Iowans attend mass.