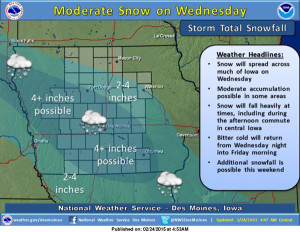 The latest forecast shows a large portion of the state could soon be buried under a half-foot or more of snow.

“The heaviest band of snow…we’re looking at northwest Iowa, coming across into central Iowa, even parts of south-central and southeastern Iowa…being in that 4 to 6 inch range,” Curtis said. Other areas of the state may not get any new snow. “For the most part, southwest Iowa will likely see something, probably up to an inch,” Curtis said. “The only parts of the state that are looking at possibly seeing nothing are the extreme eastern and northeastern sections.”

The snow is expected to arrive in northwest Iowa around 2 a.m. Wednesday and exit southeast Iowa either late tomorrow or early Thursday. “This one is going to be a pretty long duration event,” Curtis said. The snow will be followed by some bitterly cold temperatures to close out the month of February. “We’re looking at highs on Thursday and Friday in the single digits and lower teens,” Curtis said.

Another round of snow is possible over the weekend. “Currently, it’s looking like the totals will be less than what we see Wednesday,” Curtis said. “Obviously, that can change, but the big difference with what’s coming through for the weekend…it looks like it’s going to be a more widespread event.”