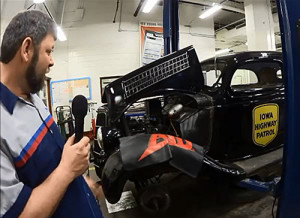 James Nelson shows off the car his students are restoring.

An 80-year-old vehicle will soon be returned to duty by the Iowa State Patrol. The 1935 Ford Tudor was the first vehicle used by the Iowa Highway Patrol, which was founded that same year.

The car is back up and running, thanks to some high school students, after spending several decades in the basement of the State Historical Building. James Nelson is director of the automotive technology program for Des Moines Schools.

“We found there were several problems in the drivetrain and suspension, we have taken the rear differential out and it’s needing rebuilt, the brake are going to be done all around it, and we’ve also replaced some suspension components,” Nelson said. Students at Des Moines Area Community College will do some body work before the interior is fixed-up and the vehicle is returned to the Iowa State Patrol.

“It’s going to be used for parades around the state of Iowa,” Nelson said. Although the vehicle was in bad shape, Nelson and his students were surprised to find the siren on the car was still in working order.

The 1935 Iowa Highway Patrol vehicle might be ready for appearances around the state later this year.