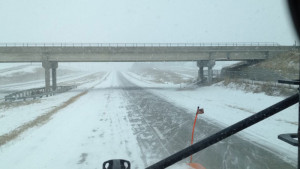 View from DOT snowplow this morning on Highway 30 west of Marshalltown.

A major winter weather storm is rolling through Iowa as snow started flying this morning in the northwest and is moving southeast through the state.

Jim Lee is a meteorologist with the National Weather Service. “The accumulations will vary widely across the state. The southwest corner will see very, very little (snow). Whereas, in a band from about the northern to southeastern part of the state we’re looking at six plus inches,” Lee said.

Parts of Iowa may receive eight or more inches of snow. Some cities in the area projected to get the most snow include Webster City, Marshalltown, Newton, and Oskaloosa. Winter Storm Warnings and Winter Weather Advisories cover nearly the entire state. The heaviest snowfall may occur over sections of central during the afternoon commute. “We’re looking for snowfall rates probably close to an inch an hour at times within that heaviest band,” Lee said.

As the snow is moving out of the state later tonight, winds are expected to increase and usher in some very cold conditions. High temperatures on Thursday and Friday will be in the single digits to teens across the state. Another smaller snow event is possible for parts of Iowa Saturday night into Sunday.