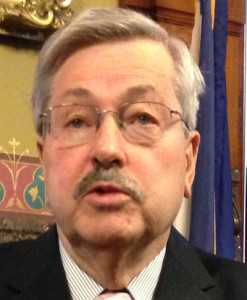 The price for gas in Iowa will go up at least 10 cents a gallon Sunday morning. Governor Terry Branstad has approved the bill increasing the state’s gas tax by a dime a gallon.

“This is a bill that’s been developed with both the Republicans and Democrats working together,” Branstad told reporters this morning. “I know it’s not easy and I know that there are also people who feel strongly on the other side, but there is a critical need for additional funding for our roads and bridges in the state of Iowa.”

Since the beginning of the year Branstad met personally with legislative leaders at least five times to discuss options for dealing with a $215 million shortfall in meeting the critical needs of Iowa’s transportation infrastructure. The outcome of those meetings was the bill that cleared the Iowa Senate, then the House on Tuesday in a span of less than two-and-a-half hours.

“Leadership deserves credit for working together on a bipartisan basis to pass a piece of legislation that I think will be very beneficial to meeting the needs of the counties and cities as well as the state transportation network,” Branstad said at about nine o’clock, around the time a formal copy of the bill was delivered to his desk.

Branstad’s staff announced at 11 a.m. this morning that the governor had signed the bill.

Critics like Senator Brad Zaun say the greatest needs are in rural Iowa, but only a third of the extra money that will be raised will go to rural roads and bridges.

“To say to rural Iowa that this 10 cent increase is going to fix your bridges and roads is just simply not true,” Zaun said during Senate debate Tuesday.

Others, like Representative Mary Gaskill, a Democrat from Ottumwa, argue the financial impact will be felt most by the “poorest of the poor” who often drive long distances to work at low-paying jobs.

“The gas tax is one of the most regressive taxes that the state imposes,” Gaskill said during House debate Tuesday.

Motorists who fill up with 10 gallons of gas on Sunday morning will pay a dollar more for a tank of gas than they would have paid Saturday night. Branstad said having the tax hike go into effect March 1 means the state will collect more fuel taxes than expected in the last four months of the state fiscal year — and the starting date for some road and bridge projects may be moved up.

“Highway 20 is one of those that has been around for a long time and we want to see that completed and moved up,” Branstad said, “and this is a way that hopefully that and other key projects can get priority and be expedited.”

The project to expand all 300 miles of the Highway 20 route from Dubuque and Sioux City into a divided four-lane highway began 50 years ago. Branstad told reporters this morning that he’s recently talked with the Iowa DOT’s director about speeding up the Highway 20 project. DOT plans currently call for completing a 12-mile stretch between Moville and Correctionville in 2018. The final segment of 29 miles that hasn’t been scheduled yet for expansion is in Sac and Ida Counties. That stretch of Highway 20 is a link between Iowa Highway 31 and U.S. Highway 71.