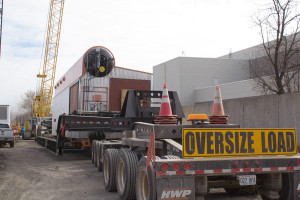 A boiler that will use natural gas to generate power at Iowa State University is loaded for transport at the train yard in Boone.

The Iowa State University power plant has three new natural gas boilers. The power they generate is expected to be cleaner than what’s come from the coal-fueled boilers they’ll replace.

ISU Director of Utility Services Jeff Witt says it will still be months before the new boilers, which arrived on campus Tuesday, are fully functional.

“We are building an addition to the plant that will house the three new boilers,” Witt said. “The addition is framed and then the boilers will go in and they’ll finish building the building around the boilers.” The new boilers could be on-line by late fall. The university faces a January 2016 deadline to comply with stricter federal environmental regulations. Two coal-powered boilers will remain in place.

The coal boilers can also burn biomass, which maintains the opportunity to increase renewable fuel use. The new boilers cost $3 million each. The university expects to spend $42 million total on the project.