You are here: Home / Fires/Accidents/Disasters / Rockford woman dies in accident during storm 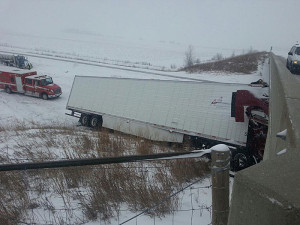 A Rockford woman died in this accident Wednesday.

A Rockford woman is dead after a six-vehicle accident on the Avenue of the Saints during the snowstorm late Wednesday morning.

Twenty-seven-year-old Amy Hild was eastbound on U.S. Highway 18 at the 193 mile marker near the Warbler Avenue overpass when a semi hit the back of her car as part of a chain-reaction crash.

The Iowa State Patrol says Hild’s car was hit when several vehicles slowed down to merge into the left lane after troopers had closed the right lane for an earlier crash. 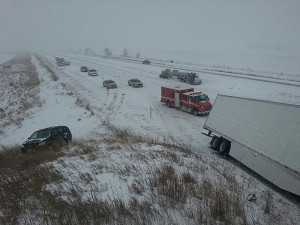 The semi hit other vehicles and then entered the south ditch where it hit the Warbler Avenue overpass. That semi was operated by Austin Lesher of Utah. Three others were taken to the hospital as part of the accident, which is still under investigation.