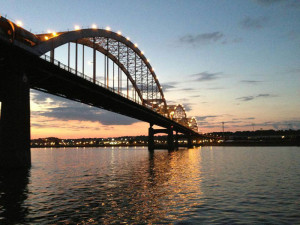 Centennial Bridge over the Mississippi River near Davenport.

A cruise line that’s made a name for itself overseas may soon be sailing along eastern Iowa’s riverfront.

You’ve likely seen the TV ads for Viking River Cruises. They offer stunning views of luxury ships steaming up European rivers like the Rhine and the Danube through historic cities in Holland, Germany, Austria and Hungary.

The line is planning to launch its first American cruises in 2017, starting in New Orleans and heading up the Mississippi. Details aren’t finalized yet, but Quad Cities officials are already in meetings with Viking to arrange an overnight stop and a daylong series of tours.

Davenport leaders this week approved $500,000 for the city’s River Vision project, which includes a new dock and pier on the riverfront once the floating casino there moves onto land.