You are here: Home / News / Low temperatures set records across the state 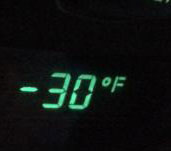 It was colder in parts of Iowa this morning than ever before on this date, at least since records have been kept, which is well over a century. At least three cities in the state reached new low temperatures for February 27th, according to National Weather Service meteorologist Kevin Skow.

“Some records were shattered across northern Iowa this morning,” Skow says. “Mason City hit minus-18 and Waterloo had minus-24 this morning. Both of which broke record lows that were set back in the late 1800s.”

Webster City also set a record of 20-below zero this morning, breaking the previous record set in 1934. Those are regular air temps, not wind chills.

Skow says the frigid weather will continue into Saturday, which may also bring some Iowans more snow. “We have a couple of systems moving in for this weekend and then early next week,” he says. “Looks like at least this weekend, it will effect southern Iowa the most and it’ll be rather snowy for the weekend.”

Skow said the week ahead promises more chances for snow though temperatures should be closer to normal in the 20s and 30s.