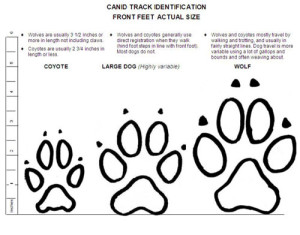 The Iowa Department of Natural Resources is encouraging hunters to be aware that gray wolves are once again a protected federal species.

DNR furbearer biologist Vince Evelsizer says they want to remind Iowa hunters after the gray wolf protection was reinstated near the end of December.

“It just means to be sure of your target — especially if you are out coyote hunting this time of the year when the season is still open for coyotes — to keep an eye out. Because now the gray wolf is protected both federally and state protected,” Evelsizer says.

The change protects gray wolves in all of Wisconsin and Michigan, the eastern half of North Dakota and South Dakota, and the northern half of Iowa. Evelsizer says it is possible a hunter might mistake a gray wolf for a coyote and fire at the animal. “I think you could, I think it’s possible. I think most Iowans when they are out coyote hunting are not expecting or really keeping an eye out for a gray wolf when they coyote hunt,” according to Evelsizer. “We are just reminding folks that it’s time to start doing that more. We’ve had a few larger canines in our state recently.”

Wolves generally are larger and bulkier while coyotes are shorter, sleek and lighter on their feet. Evelsizer says there is not a breeding population of gray wolves in Iowa. He says it’s hard to figure just how many might be here. “It’s been occasional, it’s always a little tough to tell as there is sometimes dog-wolf hybrids out there,” Evelsizer says.

The DNR has information and identification tips online at www.iowadnr.gov/wolves.