You are here: Home / Crime / Courts / Ankeny woman charged in another adoption scam 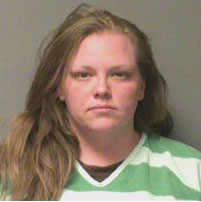 Police have charged a central Iowa woman in connection with another adoption scam. Ankeny police arrested 29-year-old Tracey Leann Bess-Thacker Friday on a charge of fourth-degree theft for accepting $200 from a DeWitt couple in February who had hoped to adopt a baby from her.

Detectives found she had filed a birth mother adoption request with Life Long Adoptions, a company that connects birth mothers with potential parents for adoption. Police say she used information from a previous pregnancy, including a sonogram and photos, to fool people into thinking she was pregnant.

Police say they were contacted in July by a Utah couple who thought Bess-Thacker was trying to run and adoption scam on them, but they had nothing to charge her with. The woman used the same scam in 2011 when she used 19 different aliases to connect with prospective adoptive parents in multiple states, including Nebraska, Illinois, Hawaii, Iowa and Kansas.

Bess-Thacker pled guilty to filing a false report and suborning perjury on August 22, 2011 in connection with that scam. During the 2011 investigation, detectives learned that many of the victims traveled to Iowa to visit with Bess and discuss the possibilities of adoption. Many victims were devastated to learn that the entire event was a hoax leaving them emotionally shattered.

Police are asking anyone who may’ve been contacted by Tracey Leann Bess or Tracey Lean Bess-Thacker to contact them. The Ankeny Police Department is asking for assistance from anyone in the process of adoption including adoption agencies to look at this information and a photograph of Bess to prevent further victimization.

“Tracy Bess is an internet predator who intentionally inflicts mental anguish and emotional distress on adoptive parents. This is a strong example of an internet bullying case that has not been considered in the law,” according to Ankeny Police Chief Gary Mikulec.