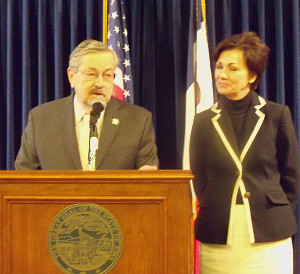 Governor Terry Branstad talked about a variety of legislative issues during his weekly meeting with reporters. Branstad was asked about criticism over the process that saw the gas tax bill quickly move through both the House and Senate and onto his desk where it was signed into law.

The governor says the bill was a bipartisan compromise after years of talking about the need for more funding for road improvements. “And I do understand that there are some people not happy with it — but any major controversial issue is always going to have people who are not going to be pleased — but this is a user fee,” Branstad says. “This is a user fee. And one of the benefits of it is the people from out-of-state who use our roads, whether they are trucks or crs, they’re going to help contribute to it.”

The governor made it clear again he wants to see the final 37 miles of Highway 20 in western Iowa expanded to four lanes. “I recognize the final decision of this is made by the DOT commission, but Paul Trombino (DOT director) and I and the lieutenant governor all recognize the need for this. And I have been a consistent and strong supporter of this for years and years and years,” Branstad says.

Branstad says he did not get a chance to talk with Illinois’ governor during the recent National Governors Association meetings about the issued of medical marijuana. The governor has said it might be possible to work something out to get the cannabis oil from Illinois to help patients in Iowa.

Branstad says he’s aware an Illinois legislator says that’s not possible, but says he is willing to look into it and says federal law may be a problem. “I guess there is a an issue with regard to that as far as the federal government is concerned,” Branstad says. “Our biggest concern is we want to try to address the concerns of families that have children with epilepsy. But we also don’t want to create unforeseen circumstances that law enforcement and the medical community are concerned about.”

Parents of children with epilepsy say although it is legal to possess the cannabis oil in Iowa to treat their children, it is almost impossible to get the oil as it is not produced here. A state lawmaker says Branstad’s comments on the issue are a false hope for parents.

The governor was also asked today about pay raises for state employees, and says he doesn’t support giving additional state money for those increases. “No I don’t think there will be a salary bill. I don’t think we have the money to provide for that, so it’s going to have to come out of the agency budgets,” Branstad says. He was asked why his chief of staff has requested nine percent more funding for the administration’s staff salaries. Branstad says the administration’s budget has been the status quo for several years and he says even with an increase now, they are still below the previous administration’s budget.

“We expect our people to work hard and I think if you compare what we’ve done with other agencies, or for that matter other branches of government, the courts or the legislature, and compare where we are versus where they are and were we’ll be under this proposed budget, I think you’ll see we’ve got a very lean, conservative, prudent budget,” Branstad says. The governor’s chief of staff says the budget request would provide a “modest” raise for employees and add one employee as they currently have 22, but are authorized by the legislature to have 23.