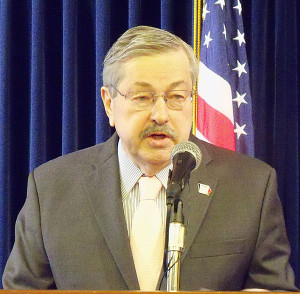 Governor Terry Branstad talked about his trip to the National Governors Association meetings in Washington, D.C. during his weekly news conference today. Branstad says one big issue is the funding of the National Guard.

“Even though the administration is asking for a budget that would be $38 billion more than the sequestration level for the Pentagon, they still cut the National Guard and eliminate the Apache helicopters from the guard — despite the fact that last year an agreement was worked out to have a commission that would review the Army’s recommendation,” Branstad says.

He says the governors all signed on to a letter to the president that expresses their concerns about guard funding. Branstad says they were also able to talk with federal military officials in person. “And we did have a very frank discussion with the Pentagon about that issue,” according to Branstad.

Branstad was also able to talk with the head of the EPA during the conference about the impact on agriculture from the delay in setting the amount of ethanol that is required to be used in gasoline.

“We expressed concerns about the lack of action on the Renewable Fuel Standard, and now the U.S.D.A. is estimating that farm income — which was down in 2014 — will drop 33-percent in 2015,” Branstad says. “And this is something that is of grave concern to us.” Iowa Ag Secretary Bill Northey joined Branstad and they had a personal meeting with the EPA Secretary.

“The word is, although she did not say it directly in my meeting, that we are going to see the R-F-S rule next spring. But we’ve heard that before,” Branstad says. Branstad says the EPA secretary mostly listened and did not do a lot of talking with the governors during their meeting. Governor Branstad says he also got to visit with officials from several countries that are key trading partners during that meeting in Washington.