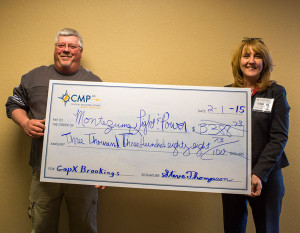 Four municipal power utilities in Iowa are seeing the first benefits from a partnership that allows them to have a stake in transmission lines.

“Our utility backs the debt issued by the Central Minnesota Municipal Power Agency. We pledge to have any shortfall in revenues that are possible, but not likely to occur… if for some reason that there is a shortfall, we have pledged to cover proportionate share of that,” Wenzel explains. The line is known as the CAPX Brookings transmission project, and customers using the transmission line pay tariffs for its use. line. “As you use capacity on that line as a community or as I suppose some large users –factories things like that that have special contracts — they pay the actual cost based on that rate, based on their use for any given month,” Wenzel says.

He says it makes sense for Waverly and the other municipal utilities to invest in the transmission line and then get paid when the revenue exceeds its cost. “That’s the theory is that you are going to have expenses regardless, and if you can have ownership equal to that then your local ratepayers are not just being renters of somebody else’s system, you are collecting rent also,” Wenzel says. Indianola recently received a check for more than $12,800 dollars, Independence $9,000, and Montezuma and Waverly each got $3,000.

Wenzel says it took this type of project to allow the smaller cities to get involved in transmission ownership. “The CMPA’s project was groundbreaking at the federal level I believe for the cost recoveries needed for municipalities to affordable do that together,” Wenzel says. “Your larger municipalities have been transmission owners, but for those the size of those in the CMPA’s project, it was just not feasible.”

He says it was not easy for the smaller utilities to break into ownership. “We just weren’t invited to the table, because it’s a lucrative business that for-profit transmission owners would like to have on their own in most cases,” Wenzel explains. The Superintendent of Montezuma Municipal Light and Power, Kevin Kudart, says it has been a good investment for his community.

“We’re always looking for investments in transmission to offset our transmission costs,” Kudart says. Kudart agrees with Wenzel that it has not been easy to find such opportunities. “It’s hard for small municipal to get invested in this, the larger investors don’t like to share real well sometimes,” Kudart says. The recent payments were for the utilities’ return for the year 2014 and will continue for the 40 year life of the CAP-X Brookings line.