You are here: Home / Military / Group plans protest at Des Moines National Guard base over drones 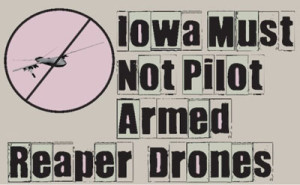 A candlelight vigil is planned this evening outside the Iowa Air National Guard base in Des Moines to protest the use of weaponized drones.

Ed Flaherty of Iowa City, a member of Veterans for Peace, says the base will soon be the headquarters for pilots who will fly unmanned airships in overseas war zones. Flaherty says he and the other demonstrators oppose the U.S. policy on the growing use of drones in warfare.

“It’s illegal, it’s immoral, it kills civilians, it’s counterproductive,” Flaherty says. “It creates more ill will to the United States and terrorism than it stifles.” The Air Guard unit has shifted its focus away from flying F-16 fighter jets to piloting the M-Q-9 Reaper drones, with operations scheduled to start as soon as the end of this year. Flaherty says he is against the whole idea of making it “easier” to wage war.

“We can send a drone with Hellfire missiles over a country that we’re not a war with,” Flaherty says. “We don’t worry too much about it getting shot down because there’s nobody on it, and we can do it without having to explain to the American public or to the people that are being targeted what we’re doing.”

Flaherty, who served in the U.S. Army from 1966 to ’68, says the use of armed drones has increased substantially in recent years and it’s, in a word, “sad.” “We’re already in the 15th year of our longest war in history, in Afghanistan, with no end in sight,” Flaherty says. “This acceptance of the idea of unending war is something that we’re trying to turn back.” About 80 people from across Iowa are expected for this evening’s rally, scheduled for 5:45 to 6:30 P.M.