You are here: Home / Human Interest / It’s ‘Spread the Word to End the Word’ Day 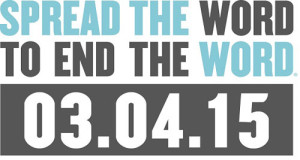 The old phrase about “sticks and stones” ends with “words will never hurt me,” but a campaign underway today in Iowa and nationwide focuses on how using words like “retarded” -can- hurt.

Rik Shannon, with the Iowa Developmental Disabilities Council, says the R-word is unacceptable and that’s the message on this “Spread the Word to End the Word” Day.

“Some of the language we use, specifically the word retarded, is pretty hurtful and insensitive to people, particularly with intellectual disabilities,” Shannon says. “This is really an effort to raise awareness and change the way people think about the language that they use.” The goal is for people to select language that’s more respectful and inclusive and Shannon says the message is getting through.

While progress is being made, Shannon says there’s still much work to do. “Unfortunately, it’s not as easy to legislate attitudes,” Shannon says. “That’s what we’re trying to do with Spread the Word to End the Word Day.” There are almost 50,000 people in Iowa with intellectual disabilities. Shannon says those people, their family, friends, neighbors and coworkers, all deserve the same respect.