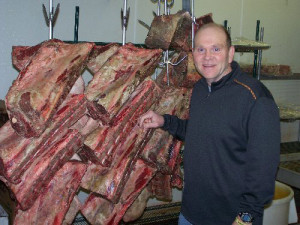 A Le Mars steakhouse is being nationally recognized for its good food and longevity. Archie’s Waeside is one of five eateries nationwide that will be honored in May with awards from the James Beard Foundation.

Owner, Bob Rand, says his restaurant has won what’s called the “American Classic” award. “That award is given to restaurants that have a very long time span and they withstand all the rigors of the things that restaurants go through to survive six or seven decades like Archie’s has,” Rand says.

Rand says the foundation has a panel of experts that look at restaurants and help decide the national food honors. He says the experts give the information to the foundation and the foundation sends out committees that do blind tests of restaurants and they keep narrowing down the field until the have a final vote. The steakhouse owner claims it is the commitment of the people, both the employees and the guests, that makes the local eatery so special.

He says they have some employees who have been working there for 50 years and some who have put in 20 to 35 years. “Which is really a long time in a restaurant to be working, which is great,” Rand says. “My mom ran the restaurant for a long time, so in the 66 years a lot of right things had to happen to be around this long. But the main thing is, that we have so many customers who continually come back and support us, and they are like family to us.”

A film production crew will be shooting video for the award presentation on March 13th and Rand is inviting the folks from Le Mars to dine at Archie’s that evening.