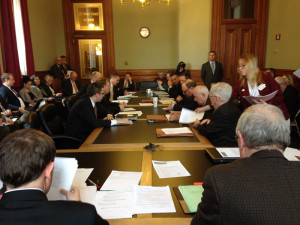 A bill that would have raised the speed limit on Iowa’s interstates has hit a dead end in the Iowa Senate, but legislators are advancing bills targeting those caught texting and driving on Iowa roads.

The Senate Transportation Committee on Tuesday tabled a bill that would have given the DOT authority to raise the speed limit to 75 miles an hour on highways designed for higher speeds. Senator Brad Zaun, a Republican from Urbandale, was the bill’s sponsor.

“I heard from probably hundreds of Iowans — some for, some against and I would say it’s healthy to have the conversation,” Zaun says. “I would say it’s dead for right now.”

But Zaun says if there’s an opportunity to insert his proposed speed hike into another bill being debated in the senate, he’ll try it.

“Might possibly do an amendment if I find the right vehicle to do that, no pun intended,” Zaun says, with a laugh.

Senator Tod Bowman, a Democrat from Maquoketa, says it’s “common sense” not to start listing all kinds of behavior — from talking on your cell to eating a hamburger — that leads to distracted driving.

“We’re hoping that people and technology adapt so that holding a hand-held will be a thing of the past,” Bowman says.

Under current Iowa law, drivers are not to be writing, reading or sending texts while they’re behind the wheel, but law enforcement cannot pull you over simply because they suspect you’re texting. A driver has to be committing some other traffic violation like speeding or running a stop light.

The bill now eligible for debate in the Senate would make texting while driving a “primary offense” and give police the authority to cite it as the sole reason for a traffic stop.