You are here: Home / News / Senate debates selling beer in Iowa — by the ‘growler’ 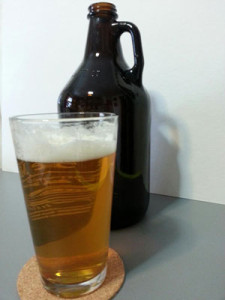 A bill to be debated in an Iowa Senate committee today deals with the phenomon of beer “growlers” — a vessel that can be used for “take-out” beer.

A growler is typically a glass bottle, with a handle, and the bottle holds at least 64 ounces of beer. The bill under consideration would allow an Iowa retailer, like Hy-Vee or Kum ‘N Go, to let customers bring in a 64-ounce growler and fill it with craft beer, for drinking at home.

Senator Jeff Danielson, a Democrat from Cedar Falls, explains: “Pour from a tap, into the growler, seal it up — comply with our open container laws and the customer can leave and take the product with them.”

Mass produced beers are sold in six-packs and by the case in retail stores, but Danielson says there is an “emerging market” for “craft” beers that are made in small batches and customers want to take home a 64-ounce sample to try it at home.

“And we want that market to thrive, but we don’t want to upset post-Prohibition era laws that have made sure that alcohol policy in Iowa is a safe product,” Danielson says. “That’s why I’ve said, ‘Yes,’ to this particular policy at the subcommittee level. It’s up for the committee to make a judgment and then for a larger discussion in the Senate, if we can get past that step.”

The proposal would not allow brew pubs to sell their beer in the large, take-out growlers, however. Under current law, a brew pub where you can buy both food and a beer has to put their beer in a keg, sell it to a distributor and then buy the keg back before it can be sold in a growler. Danielson argues that’s to ensure the beer is produced according to health and safety standards.