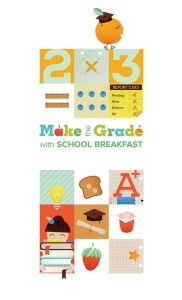 The Iowa Department of Education is trying to raise awareness of the availability of breakfast programs at schools and get more kids to take advantage of them for their first meal of the day. The push comes after a study with the University of Iowa in which one-third of parents reported their children sometimes or never eat breakfast.

The Education Department’s bureau chief of food and nutrition, Ann Feilmann, says part of their job is to let everyone know that school breakfast programs are available in every school. “We’re working with parents to make them more aware that schools are serving breakfast. We’re encouraging alternative styles of breakfast service,” Feilmann says.

Marshalltown’s Miller Middle School is using an alternative style service called a “grab and go” cart that gives students breakfast they can take with them instead of having to sit down. Feilmann says they’re also using that system to encourage kids to take advantage of it.

“If a student is a couple minutes late coming into class and they have their breakfast bag, that is their pass to come in late…just so they don’t have to cut off kids in line when the bell rings. I though that was taking it one step further in supporting getting kids to have breakfast,” according to Feilmann.

She says they also do a second chance breakfast available after first period for students who didn’t get their breakfast right away when they get to school. She says it’s especially important for elementary kids. She says a child doesn’t have to make the choice of playing with their friends on the playground or getting breakfast before school. “They may be more excited to see their friends and play on the playground than to go in and get breakfast, but once they get into classroom, then they are hungry and their stomachs are growling and it’s hard for them to focus and they get distracted,” Feilmann says.

Encouraging schools to offer alternatives to traditional breakfast foods is another strategy. “Some kids like cereal and milk and what we would consider traditional (breakfast). But think about things like cheese quesadillas with salsa to dip it in or a ham and cheese sandwich, or tortilla wraps,” Feilmann explains. “Some of those alternative type menus might get those kids who aren’t quite the breakfast food fan, but yet give them something else to eat too.”

Feilmann says they have some resources available for schools to push the importance of breakfast too. “We worked with high schoolers, actually the students, to develop ways to use social media tools to develop messages and get the word out to students,” Feilmann says. “And that is available on our website, that resource kit that would help food service directors or schools that would want to help promote breakfast.”

Iowa Department of Education data show more than 80 percent of students did not participate in school breakfast programs in the 2013-14 school year, while Iowa ranks 48th in the nation for the percentage of students eligible for free and reduced-price meals who eat breakfast at school.

Feilmann’s goal for getting kids to eat breakfast is simple. “I guess it would be any student who is not getting breakfast at home — I would love to have them eat breakfast at school — because it just helps them to succeed,” Feilmann says.