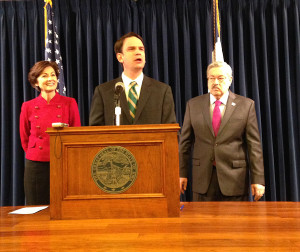 Ryan Wise of the Department of Education along with Lt. Governor Reynolds and Governor Branstad.

State officials are planning to host an “Iowa Financial Literacy Summit” on May 5th for educators, students and their parents. Governor Terry Branstad says students from middle school and high school are the target audience for the summit, so they’ll be prepared to make good decisions about borrowing money for college.

Only three out of every 10 students at Iowa colleges or universities graduate debt-free. Lieutenant Governor Kim Reynolds says the three state-supported universities are taking steps to address the high level of debt among the student bodies.

“To fundamentally change the debt mindset and to increase financial awareness, we must encourage financial literacy — beginning at an early age,” Reynolds says.

Officials in the Iowa Department of Education are organizing the Financial Literacy Summit and Ryan Wise, the agency’s deputy director, says the “temptation” of credit cards and borrowing too much money leaves many students stuck with significant debts before they even land their first full-time job.

“It has never been easier for young people to spend money they don’t have,” Wise says.

In addition to the summit in May, the state education department has a “work team” that is evaluating the financial literacy curriculum being used in Iowa’s K-12 classrooms.

Learn more about the summit here.