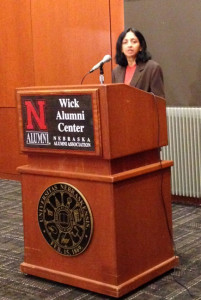 The University of Iowa and Iowa State University are partnering with two other schools to create a research center that will focus on analyzing highly-sensitive data from the federal government.

The new facility will be located on the campus of the University of Nebraska-Lincoln. It’ll be run by UNL economics professor John Anderson and researchers will have access to a wealth of data from the U.S. Census Bureau to the IRS.

“So, as you might imagine, the federal government is quite particular about how micro-level, individual-level data are used and so there will be very tight security procedures for researchers.”

Only researchers who receive approval for their projects from the Census Bureau will be allowed in and then only after passing a security clearance and being sworn in by the bureau. The facility will become one in a series of Research Data Centers, or RDCs, across the country and the research would cover several fields, from medical to housing and from labor to transportation.

As an example, Anderson says one benefit may come in the research of public finance. “One of the opportunities that I will be afforded with an RDC is that I will have access to IRS data,” Anderson said. “That enables one to do all kinds of interesting research about the tax system and potential reforms of the tax system.” A National Science Foundation grant of $300,000 will provide the seed money needed to build the center.

“Previously, there was no RDC between Chicago and Texas and southern California,” Anderson says, so we made the pitch in our NSF proposal that the central part of the country needed an RDC to give researchers access.” Chitra Rajan, associate vice president for research at Iowa State University, says there will be a “node” or “branch” of the center in Ames, so ISU researchers won’t have to travel to Lincoln.

Rajan says, “We were thrilled that in our first very competitive NSF proposal, we actually got awarded and we are indeed looking forward to seeing this facility be established so that our faculty and our researchers can have access to this goldmine of data that is otherwise not possible.” Other partners in the project include the Nebraska Medical Center in Omaha and the University of South Dakota.