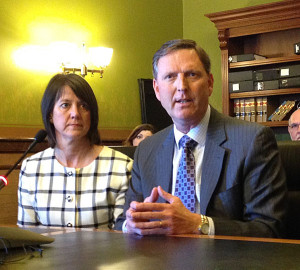 A former candidate for governor who has become a leader in Iowa’s Christian conservative community is calling on Iowa lawmakers to legalize the growing and harvesting of marijuana, so cannabis oil can be produced and dispensed here as treatment for chronic epilepsy.

Bob Vander Plaats said he “cheered silently from the sidelines” last year as the parents of children with intractable epilepsy successfully lobbied for a new law that decriminalized possession of cannabis oil as a treatment for the condition.

“While last year we stayed quiet, this year we believe we need to lend voice because we see a gap — and we see an unnecessary gap,” Vander Plaats said. “And the unnecessary gap is while last year legalized the access to cannabis oil, there really isn’t any access for these parents.”

Vander Plaats — with his wife, Darla, sitting beside him — spoke out at a statehouse news conference this afternoon. The couple’s third son, Lucas, has a very rare brain disorder that has caused severe seizures. Vander Plaats said that’s why he and his wife have such respect for the parents who are seeking access to cannabis oil.

Vander Plaats was speaking as an individual, not as president of The Family Leader, the Christian conservative organization he leads. Vander Plaats also said he’s not backing any specific bill.

“We have a lot of bright minds in this capitol, people who I respect greatly,” Vander Plaats said, “that I think we can cross this hurdle fairly quickly.”

Vander Plaats told reporters he believes Iowa State University and the University of Iowa, for example, have the “expertise” to grow, harvest, process, manufacture and dispense cannabis oil.

Several advocates for access in Iowa to cannabis oil attended the Vander Plaats news conference. About a half hour later, many of the same people attended a subcommittee hearing on a Senate bill that would set up a system for making and dispensing cannabis oil in Iowa. If that bill becomes law, cannabis oil could be used as treatment for a variety of chronic conditions, like post traumatic stress, and could be used by cancer victims to try to control their pain and nausea.