You are here: Home / Crime / Courts / Fight call for police leads to discovery of bombs in Storm Lake 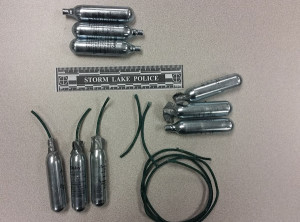 Police officers who were called to break up a fight in northwest Iowa this week found some unusual items inside a home. Storm Lake Police arrested two young women and a teenage boy on charges related to the fight early Wednesday morning.

They charged 28-year-old Dion Caldwell of Storm Lake with possession of explosive devices with intent, which is a felony, and public intoxication. Caldwell was jailed on a $10,000 bond.