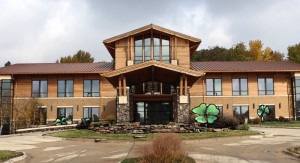 Sketch of proposed clover sculptures at the Iowa Lottery headquarters.

One day before St. Patrick’s Day, the Iowa Lottery Board has signed off on installing giant shamrocks at the new Iowa Lottery Headquarters building in the Des Moines suburb of Clive.

Lottery spokesperson Mary Neubauer says they looked at a lot of proposals with the help of the Iowa Arts Council. Des Moines artists of Dennis Reynolds and T.J. Moberg proposed the huge metal four-leaf clovers.

“As soon as we all saw the project, as soon as we turned the page and saw the proposal it was just like ‘oh lottery luck there it is’ in the form of that project,” Neubauer says. The Iowa Lottery is required by state law to include public art as part of the renovation of the building. “The idea is to ensure that when the state builds something new or refurbishes an existing property, that public art is part of that project,” Neubauer explains. “Under the law, you need to spend one-half of one percent of the total cost of the project. So, in the case of the lottery’s project, it’s about $30,000.”

There’s an additional allowance of $10,000 to prepare the site and install the sculpture outside the building. Neubauer says the large shamrocks will draw attention to the building and they speculate the sculpture might become a good luck charm for lottery players too. “We wonder if one of these clovers is going to become the lucky clover that everybody ends up rubbing for luck — and one spot on one of the clovers is going to have no paint left on it because it will get rubbed off over time. That could be part of the project as it moves ahead,” Neubauer says.

They hope to get the clovers installed by this fall. Neubauer says they hope they have good enough weather to get the sculpture installed before the cold weather. The Iowa Lottery moved to the new building in December after selling their old headquarters building west of downtown Des Moines to the Des Moines schools.