You are here: Home / News / Ruling means union state employees will pay some toward health insurance 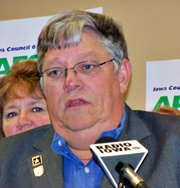 About 19,000 state government employees who are covered by the AFSCME union contract will, for the first time, start paying a small share of their monthly health insurance premiums. An independent arbitrator was brought in when labor and management could not reach an agreement after three months of negotiating. The arbitrator issued a split ruling this weekend.

The employees covered by the AFSCME contract will start paying about $20 a month for their health insurance premiums. That was AFSCME’s final offer on the benefit side of the equation.

Governor Branstad’s administration had been pressing for far more — like up to 15 percent of premium costs next year. Branstad’s spokesman expressed disappointment in the decision, saying most Iowans pay far more than $20 a month for health care coverage.

AFSCME Council 61 president Danny Homan called the arbitrator’s decision “fair” and “reasonable.” He noted the arbitrator had sided with Branstad’s negotiators on wages.

The nearly 19,000 employees in the state executive branch and the judicial branch who are covered by the AFSCME contract will receive a 2.5-percent pay increase on July 1st. There will be a pay boost of slightly less the following year and a final pay increase of 1.25-percent on January 1st of 2017.