You are here: Home / Crime / Courts / NCAA pools legal in Iowa with a few restrictions 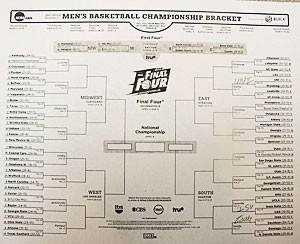 With three Iowa teams in the NCAA basketball tournament, it’s a good bet there are a lot more people interested in tournament pools this year.

The Iowa Department of Inspections and Appeals oversees the tourney pools and spokesman David Werning confirms they have been a hot topic since the selection show Sunday.

“March is a very strenuous time for our staff because they are constantly answering phone calls from people who want to participate in office pools, who want to show their support for the teams — this year in particular — and also win a little cash on the side. So, it’s a heavy month for us,” Werning says. If you are wondering about your office pool or the tournament pool with your friends and neighbors — Werning says it’s okay. “In general, Iowa law permits individuals to bet on the tournaments. This means office pools can be organized, other activities associated with the tournament, are all fine,” according to Werning.

But, there is a limit on how much cash can be in the pool. “No one can win or lose more then $50 in any 24-hour period. The individuals participating have to be individuals as such, no one can act as an agent for another person, so there is no bookmaking,” Wering says. “The game has to be conducted in a fair and honest manner. And finally — as far as the individual pool activity — anyone can participate, there’s no age limit.”

Those rules change however if you want to get into a pool at your local watering hole. “The establishment has to have a two-year social gambling license. The pool itself can only be conducted per game, so you can’t actually fill out brackets, it can only have a pool for each individual game, it has to be done in a grid format,” Werning explains. “The restrictions on the cost: no participant can wager more than $5 and no individual can win more than $500 on a single pool.” Unlike individual pools, you must be 21 or older to participate in a pool at a bar or other type of establishment.

When it comes to individual pools, the enforcement of them is a little like fireworks — they aren’t going to come after you unless there is a complaint. “This isn’t something that we really take a lot of interest in as far as doing investigations, recognizing that offices pools are pretty much a way of life during the month of March. If someone does call in and complain, that would be referred to the Division of Criminal Investigation for them to take a look at it. They are our investigatory arm in these cases,” Werning says.

With the Panthers, Cyclones and Hawkeyes all in the tournament, Iowans are going to have to decide if they are really in it for the money, or if they are going to fill out those brackets based on their hearts and team loyalty.