You are here: Home / News / Senator predicts confirmation for new director of state agency in turmoil 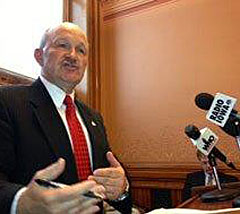 A newly-revealed letter from federal investigators concludes state employees who ruled on contested unemployment cases have felt pressured to rule for businesses rather than the workers.

Senator Bill Dotzler, a Democrat from Waterloo, had asked the U.S. Department of Labor to investigate the state’s Workforce Development agency a year ago and this morning Dotzler said he felt vindicated.

“Actually they found basically everything that I said to be true,” Dotzler said this morning. “…Let’s hope this chapter is behind us.”

Teresa Wahlert abruptly retired from her job as director of the agency in January after spending months defending her management of the agency and the move to make administrative law judges in the department “at will” employees who could be easily fired. Federal officials say the agency should return those those judges to “merit” employee status, hired for their experience rather than political connections.

Wahlert told The Des Moines Register last night that she had tried late last year to make the change, but was overruled by the governor’s top advisors. Dotzler predicts the woman who’s now in charge of the agency will easily win senate confirmation.

“I feel confident that the new director is taking steps in an appropriate way to make Iowa Workforce Development have more access to Iowans,” Dotzler said this morning, “and to make sure that its mission of taking care of Iowans when they’re unemployed or want to upgrade their skills or to find work in a better environment have a fair opportunity.”

Workforce Development director Beth Townsend was appointed to the post in January. Townsend told senators she’s been meeting with workers in the department to discuss ways to improve both employee morale and the agency’s operations, but is waiting until senators confirm her for the job until making many changes.