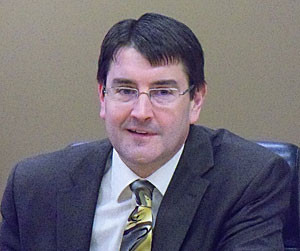 The top education official in the state is once again leaving to become a school superintendent. The Cedar Rapids Community School District announced late Wednesday that Iowa Department of Education director Brad Buck will become the district’s new superintendent on July 1st.

The 45-year-old Buck is a Cedar Rapids native who was appointed by Governor Terry Branstad to the top education post in 2013.

Buck had been superintendent at Saydel when he took over as the Education Department director, replacing Jason Glass. Glass left the job to become a superintendent in a Colorado ski resort community.

Buck graduated from Cedar Rapids Jefferson High School in 1987. He went on to earn an undergraduate degree in biology from the University of Northern Iowa, and a masters and Ph.D. from Iowa State University. Buck began his career in education as a middle school science teacher in the Ankeny Community School District. He taught for five years before taking on a number of administrative roles in the Waukee, Hudson, and North Mahaska school districts, and then became Superintendent of the Saydel Community School District.

Buck issued this statement:
“As a native of Cedar Rapids and a proud graduate of Jefferson High School, I’m thrilled to return to my hometown in this role. It’s clear to me that this is a school district that is committed to innovation and a vision of ‘Excellence for All,’ and I stand ready to be an integral part of delivering on that vision. At the same time, I’m very grateful for the opportunity I’ve had to serve as the director of the Iowa Department of Education, where I’ve worked among passionate, hard-working servants and leaders who have Iowa students’ best interests in their minds and hearts. The Department’s leadership has been essential as Iowa works to implement several ground-breaking initiatives, including the most comprehensive teacher leadership system in the nation and an effort to ensure all Iowa students read well by the end of third grade. These are long-term commitments that are larger than the leadership of one individual. I’m also deeply grateful to Gov. Branstad and members of his staff, to past and present members of the State Board of Education, and to educators across the state. Iowa is focused on the right work to improve instruction and raise student achievement.”

Governor Branstad released this statement:
“Director Brad Buck has been instrumental in the implementation of Iowa’s transformational education reform, including the Teacher Leadership and Compensation System. We appreciate the service and leadership of Director Buck and wish him the best as he continues his career in education in Cedar Rapids.”