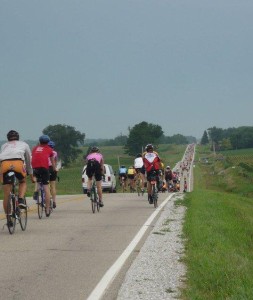 Davenport is planning to host RAGBRAI and the Bix 7 road race.

Davenport is the final stop on this year’s RAGBRAI and planning is underway on how to best handle thousands of bicycle riders.

Dave Struckman, the city’s public safety coordinator for the event, says the first major decision for his committee is to find the best place for a “dip site,” where riders will officially end their trip across Iowa by dipping their front tires in the Mississippi River.

Struckman, a retired police captain, says “So, then you’d establish the route to get to that point and you can do that logistically and also, considering the resources you have to be able to properly manage that route so it’s safe for the riders involved in RAGBRAI but also for the community members in Davenport who have to maneuver around the different detours or closed streets.”

In addition to planning the route, Struckman is looking into things like the emergency response, medical care, parking, camping, transportation and shuttle service. He also has to plan for the weekend before the ride, as many riders will leave their cars in the Quad Cities, then take a shuttle bus across the state to the starting point in Sioux City on the Missouri River.

“It’s a lot of work with a lot of people participating and a lot of people contributing their expertise and their ideas,” Struckman says. “Once it comes together, it’s really neat.” This year’s RAGBRAI will end in Davenport on July 25th, the same day as the Bix 7 road race, the annual 7-K run that attracts up to 20-thousand runners. Some bike riders will come into the city early so they can run in the Bix.