You are here: Home / News / Huckabee dives back into Pizza Ranch circuit 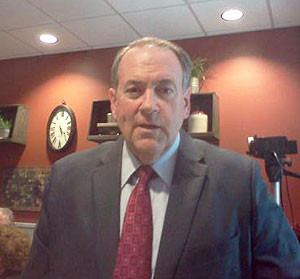 Former Arkansas Governor Mike Huckabee has returned to a franchise that became a staple of his successful 2008 Iowa Caucus campaign.

Huckabee met with about 60 Iowans at a Pizza Ranch in Sioux City on Wednesday. It’s the second time this month he’s held an event at one of the restaurants in the Iowa-based chain, but Huckabee isn’t ready to say he’s officially a presidential candidate for 2016.

“It’s a good question and a fair one and it’s one that I’m definitely considering and contemplating, but we’ll make a decision over the next few weeks,” Huckabee said. “And I promise people in Iowa will definitely know it if I do.”

Huckabee ended his syndicated radio show more than a year ago and his Saturday evening TV show on the FOX News Channel ended in early January. More recently Huckabee has ended his celebrity endorsement of a controversial product he touted as a way to reverse diabetes. Huckabee told reporters in Sioux City last night that Iowans making a voting decision will focus on his political record rather than what he’s done since leaving office.

“People are going to judge me based on my record as governor for 10 and a half years and that’s a good record: cutting taxes, building roads, improving schools,” Huckabee said. “That’s what people are interested in in this next president and I’m very comfortable, if they look at that record, they are going to say: ‘This guy can lead.'”

Huckabee stopped at a Pizza Ranch in Council Bluffs, too, on Wednesday afternoon. He’s making stops in Le Mars and Orange City this morning.