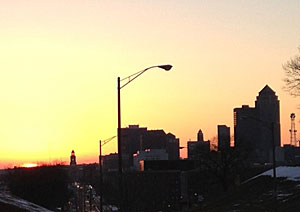 A state senator is calling on rural Iowans to “boycott” Des Moines in the wake of a lawsuit filed against three northwest Iowa counties.

Senator Randy Feenstra, a Republican from Hull, says farmers from around the state bring a lot of business to the capital city. “We go there to vacation, we go there to shop…and if they’re against rural Iowa, then we do not need to support their economic industry. Maybe we should boycott Des Moines,” Feenstra says. “Des Moines is being very arrogant in their mentality on this issue.”

Feenstra believes, over the past decade, “giant steps” have been taken to cleanup Iowa’s waterways. “I just think it’s maybe time to send Des Moines a clear message and say, you know what, if you don’t appreciate the farming community, then maybe we should stop going to your community and spending our funds there,” Feenstra says.

Leaders of Des Moines Water Works claim the nitrates spilling into the Raccoon River in northwest Iowa are threatening central Iowa’s drinking water supply and driving up the cost to remove pollutants.