UNI pulled away from Wyoming and went on to an easy 71-54 win in the first round of the NCAA Basketball Tournament today in Seattle. The Panthers built their lead to as much as 21 points, and never let Wyoming get closer than nine points in the second half. Panther coach Ben Jacobson.

“Great basketball game, loved being a part of it, knew watching film of Wyoming that they had a bunch of tough guys,” Jacobson says. 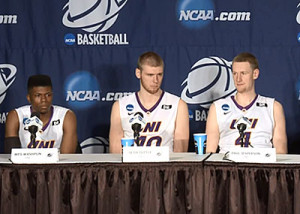 “You know there’s no way I can describe to you how proud I am of those guys, the guys who are coming off our bench. That was in a lot of ways, one of or maybe the key to our season,” according to Jacobson.

Senior Seth Tuttle also credits the bench for pushing them through. “It’s really important, you know we go ten deep sometimes, and I can tell you how it feels sometimes when you get out there for awhile your legs start reminding you how important it is to have a deep bench,” Tuttle says. “The important thing is, we’ve got ten guys who are really capable of helping our team when they step on the floor. As the game showed today, we had a lot of guys step up for us.”

Coach Jacobson was asked about his team being loose and ready to play coming into the game. Jacobson says he felt it at breakfast. “It’s one the things that we’ve talked about the past two weeks, its’ the personality of this team. They’ve taken ownership of being who they are — being relaxed, being loose is a big part of who they are — and they have combined that with being really tough and really competitive,” according to Jacobson. “So yeah, on the bus on the way over, at breakfast this morning when I heard them talking and laughing, I knew were going to play well. I didn’t know if we were going to win, but I knew we were going to play well.”

Northern Iowa ups their overall record to 31-3 and they advance to the next round on Sunday.