You are here: Home / Sports / Gonzaga too much for Iowa in 87-68 NCAA tourney loss 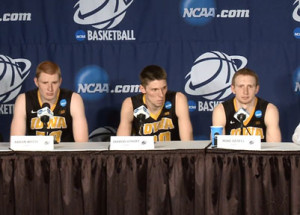 The Iowa Hawkeyes fell behind early and never got the lead in losing to Gonzaga 87-68 in the NCAA Tournament in Seattle Sunday.

Gonzaga came out hot, hitting seven of ten three-pointers int he first half. Iowa coach Fran McCaffery says they were a tough team to defend.

“They have weapons any way you look at it, you know you can trap the ball screen, they’ve got shooters, they can throw it inside, they can drive the ball, and they share the ball, they are willing passers — 20 assists on 32 field goals,” McCafferey says. “As hard as it is, I don’t think our ball pressure was what it needed to be.”

Gonzaga shot over 60-percent from the floor in both halves.”I thought we worked hard, we obviously got down into a hole and you don’t want to do that because they got comfortable shooting the ball,” McCaffery says. 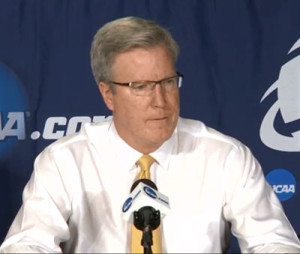 Iowa was down 17 at halftime and tried to make a run in the second half, but couldn’t get back into the game. McCaffery says they wanted to keep working and were trying to get do something to get Gonzaga’s shooting percentage down and then get some stops on defense. ” We had it to 11, had a clean look at a three in transition, that goes in it might have changed some things,” McCaffery says. ” We felt like if we could have got it to single digits, that might have been something that cools them off as much as our defensive intensity.”

Jarrod Utoff led the Hawkeyes with 20 points and Aaron White had 19. White finished his Iwoa career second in points with 1,859, and third in rebounds with 901. Anthony Clemmons was the only other Hawkeye in double figures with 10. Clemmons, Josh Oglesby, Gabe Olaseni and Kyle Denning also finished their careers along with White.