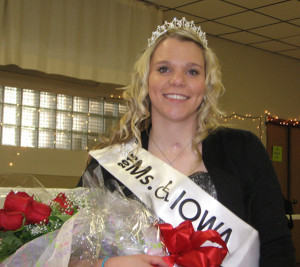 Iowa has a new advocate for people with disabilities. Katie Helmers of Dakota City was crowned in Iowa City over the weekend as Ms. Wheelchair Iowa for 2015.

The 25-year-old Helmers lost the use of her legs in a car crash in March of 2013. As the new titleholder, Helmers says she plans to target a variety of businesses that claim to be handicapped accessible when they’re really not.

“Say, you’re going to stay at a hotel and the room you get is ‘handicapped accessible’ but then you can’t use the sink or the shower,” Helmers says. “It’s pretty frustrating when you can’t even get underneath the sink to brush your teeth or wash your hair.”

Helmers says she’s been surprised by the lack of access in many public restrooms, even in airports, which don’t come close to meeting the required standards of the Americans with Disabilities Act.

“I had to use a stall that was missing part of the stall because that was the only one I could use that I could get my wheelchair in there,” Helmers says. “So, I was exposed for everyone to see. It was slightly humiliating but I had to do what I had to do.”

Helmers had been working at Walgreens prior to her accident and she says her managers and the rest of the staff have been amazing in their response to her crisis and recovery. She still works at the same store as a pharmacy technician. “There is funding that they used to help me get a standing wheelchair that goes from sit to stand,” Helmers says. “I have my own workstation now that better accommodates me and I can also help our patients better as well.”

The Ms. Wheelchair Iowa program is open to any Iowa women between the ages of 21 and 60 who use a wheelchair or a scooter for 100% of their daily mobility. The competition isn’t a beauty pageant. It’s for women who use wheelchairs to advocate for — and showcase the abilities of — people with disabilities. The contestants are judged on their achievements and accomplishments since the onset of their disability.

Helmers will represent Iowa at the Ms. Wheelchair America Pageant this summer. The national event is being held in Des Moines this year — in July.