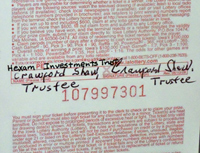 A Texas man has been charged in the Hot Lotto mystery ticket case. The Iowa Division of Criminal Investigation and the Iowa Attorney General’s Office charged Robert Clark Rhodes II of Sugar Land, Texas with two felony counts of fraud.

He was arrested in connection with a Hot Lotto ticket that was bought in Des Moines in 2010 and was worth more than 16 million dollars, but was never paid out as the true owner of the ticket could not be identified before the ticket expired.

Iowa officials says they received assistance from Texas Lottery Enforcement officials in the arrest of Rhodes in Texas last Friday night. Rhodes was being held on a $500,000 cash bond and is awaiting extradition back to Iowa.

Investigators arrested 51-year-old Eddie Tipton of Norwalk back in January, and charged him with two counts of fraud. Tipton is believed to have purchased the winning ticket, but worked for the Multi-state Lottery Association as the director of information security, and was not eligible to purchase tickets. The DCI says their investigation is on-going.