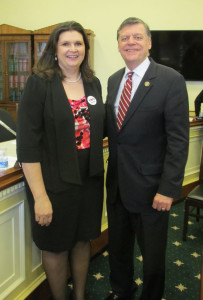 A researcher at the University of Iowa College of Dentistry testified before a U.S. House subcommittee last week about the importance of a group of programs that helps first generation college students from low-income backgrounds get into and graduate from college.

Carol Fischer says she was a 33-year-old single mother who never thought about going to college until she learned about the federally-funded “TRiO” programs from a recruiter at a county fair.

“Someone hollered at me and said ‘have you been to college?,’ and I said ‘no I can’t afford this only rich kids get to go to school right?,’ because I didn’t know,” Fischer says. “And through this program he helped me find out that I could go to college and then find programs within college that helped provide the support I didn’t have.” She used the program to get her undergraduate degree in Oklahoma, and then went on to get a masters and eventually her doctorate at the University of Iowa, where she now works in a postdoctoral research program.

Fischer testified before the House committee in an effort to encourage them to restore money to fund the program. “The funding was cut a few years back — and in fact the funding is about the level of the funding in 2001 — and so therefore we are missing out on about 68-thousand kids that we can’t help because we don’t have enough funding.” While Fischer has become an advocate for the program, she says the recent trip to Washington was a learning experience.

“Because I figured out that a lot of time we sit back and we think that Senators, congress people are up there making choices but they’re not paying attention,” Fisher says. “And I learned that they really are, because they were asking real life questions of people like me sitting there and saying ‘what helped you more, what’s most important, what can we do to make this better across the board.'”

Fischer says the most important part of the program in her opinion is not just helping these students get into college, but supporting them along the way. “And a lot of students even if they get there, they struggle because they don’t have the support. One of the most important programs I think are the programs that provide support for these students while they are in college,” Fischer says. “It almost makes it them family for them. So it’s a support thing that almost becomes like your family.” Fischer says there are about 5 million graduates who have participated in TRiO programs. She shared her story with the U.S. House Labor, Health and Human Services, and Education Appropriations Subcommittee.

The University of Iowa has one of the largest TRiO programs in the nation but the head of the program says limited funding only allows 350 students to participate at a time.