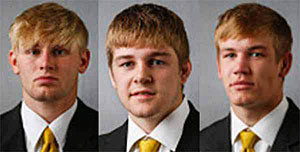 Marion Police say the three young men will also like face burglary charges. At the time of their arrest, around 1 a.m. on March 18, they were in possession of several items believed to be taken from burglaries in the Marion area.

The suspects are identified as Ross Lembeck of Lisbon, Logan Ryan of Bettendorf and Seth Gross of Apple Valley, Minnesota. All three are 19-years-old and freshmen at the University of Iowa. They were all red-shirt competitors on the Hawkeye wrestling team this season.