You are here: Home / Fires/Accidents/Disasters / Search on for owner of dog that jumped off Des Moines viaduct 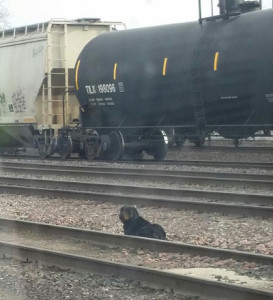 Rocco after jumping off a viaduct.

A frightened young dog took a leap off a bridge in Des Moines last Sunday, surviving a two-story fall with injuries. Now, officials with the Animal Rescue League of Iowa are trying to find the owners of the Rottweiler so he can be returned home.

The Rescue League’s Josh Colvin says a passing motorist spotted the dog on the Guthrie Avenue viaduct. She called to the dog but it panicked and jumped onto the tracks far below. “It was probably pretty traumatic for the person because she actually saw it happen,” Colvin says. “The dog jumped over the viaduct and when she went over to check on him, he was still alive but that’s a long ways down and so it was very, very concerning.”

The woman contacted the Rescue League which rushed the animal to the Iowa Veterinary Referral Center, a 24-hour emergency clinic. “The injuries, we’re still a little iffy on, whether the dog needs surgery,” Colvin says. “He has some injuries to the front legs and he’s still under observation to see if there’s anything more extensive.” 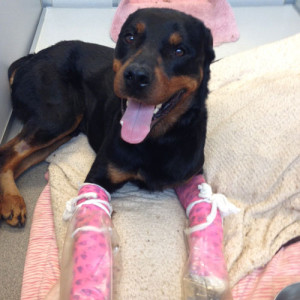 The dog has been nicknamed Rocco by the Rescue League staff. He’s fully-grown, but still quite young, according to Colvin.

Pictures of the dog and the story so far have been posted to the website, IowaPetAlert.com, in an effort to locate an owner. “We’ve had the dog on there for a week and no luck,” Colvin says. “Anything we can do to get the owner to come forward and to let people know what happened and that the dog is okay. We just need them to come forward so we can get this puppy home.”