You are here: Home / Education / Another meeting, but no end in sight to statehouse stalemate 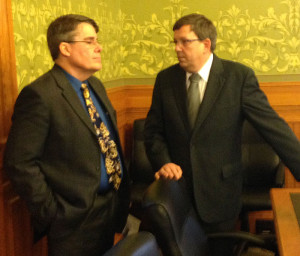 There was another meeting of key leaders late Tuesday afternoon, but still no end to the statehouse stalemate over state aid to public schools.

A 10-member conference committee assembled weeks ago to try to break the impasse met, but both parties kept to their respective bargaining positions.

House Speaker Kraig Paulsen of Hiawatha, the top Republican in the legislature, said Republicans are not going to budge from their proposal to boost general state aid to schools by about $100 million.

“That is a very real commitment,” Paulsen told reporters after the meeting. “It’s a significant amount of money and we’re very concerned about going any higher.”

Democrats, meanwhile, are sticking to their call to spend 100-million more than Republicans have offered. Senate Majority Leader Mike Gronstal of Council Bluffs, the top Democrat in the legislature, said the state committment to education has declined in the past three decades.

“K-12, tuition grants, community colleges, Regents institutions, the Department of Ed — all of that taken together used to be 62 percent of the state budget,” Gronstal told reporters after the meeting. “It’s down to 55 percent and people wonder why some things are starting to lag in terms of student achievement.”

By law, the decision on how much money the state’s public school districts will get for the school year that starts this fall was supposed to have been made more than a year ago. There is no penalty for legislators, however, for failing to meet that deadline.

If legislators fail to reach an agreement this year, districts will get the same amount of money for the next school year as was received this year.