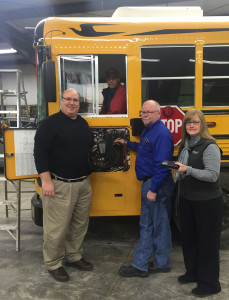 Greene County school officials show off technology that puts wifi in their bus.

Several of Iowa’s rural school districts are investing in WiFi school buses for students who are spending hours of their day heading to and from school or to sporting events. Tim Christensen, superintendent of the Greene County Community School District, says they’ve upgraded two “activities” buses so far that are used for hauling various sports teams to competitions.

“They leave about 3:30 to go on these trips and with a lot of homework, they sometimes don’t get back on these trips until 11 or 11:30 at night,” Christensen says. “We thought it would be a great opportunity to have wifi on the buses to allow the kids to do their homework while they’re on the trip before they got home.”

Greene County is in the third year of a Chromebook initiative where all 450 students in grades nine through 12 have been issued laptops. Christensen says students like having the ability to get online to work on reports while the miles roll by, though some also used the bus-based internet connection to watch last week’s NCAA basketball games.

“We hope they’re doing homework or some other things,” Christensen says. “We anticipate that it will hopefully keep them busy. We do have filtering on the WiFi so they do not have the ability to get anywhere that we do not want them to get to.”

While the WiFi is just on two of the district’s buses for now, Christensen says they may eventually convert the entire fleet. The technological leap didn’t come cheap, though.”We had to buy a router for each of the buses which is about $400,” Christensen says. “Basically, there’s a wireless connection through cell service, the cost of that is in the neighborhood of $1,500 a year, so, a little bit of an investment up-front and an ongoing investment but we think it’ll be worth it.”