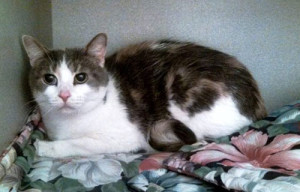 Mason City police are looking for a man who tossed a duffel bag with a cat inside it into the Winnebago River. Witnesses told investigators they saw the man throw the bag into the river near the bridge on North Kentucky Avenue at about 6 P.M. Saturday.

Sybil Soukup, executive director of the Humane Society of North Iowa, says the cat was rescued. “Fortunately, a nice couple were witnessing this act happening and were curious enough to go over and pull that duffel bag out of the water,” Soukup says. “The person that dumped the bag was already gone, they were on foot. They fished the bag out of the water and heard noises in there, yowling. They opened it up and kitty-cat was in there, soaking wet and very scared.”

The couple called animal control and the cat was taken to the Mason City Stray Animal Shelter. Soukup says they hope law enforcement captures the person responsible for the act. She notes, the Humane Society has no authority to arrest anyone but they cooperate with law enforcement on this type of case.

There are pictures of the cat on the society’s website and Facebook pages and anybody with information about the cat is asked to contact Mason City police at (641) 421-3636. Soukup hopes to find a new home to welcome the feline as a new family member. She says they’ve named the cat “Winnie,” after the Winnebago River, where she was rescued. She says once their veterinarian gives Winnie a clean bill of health, the cat will be put up for adoption.

Soukup says Winnie is in pretty good shape despite the traumatic incident. She says the cat is warm and dry, getting a lot of attention, love and food, but it’s still timid and scared after the horrible ordeal.