You are here: Home / Agriculture / Monitoring continues for bird flu that has shown up in other states 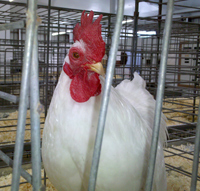 State officials are keeping an eye out for signs of a bird flu that has recently been discovered in other states. State Veterinarian David Schmitt says the influenza is highly pathogenic, or has a high death rate, particularly in turkeys and chickens.

“It first appeared in the northwest part of the United States in the Pacific Flyway in some commercial and backyard poultry that were affected. It’s now show up in the Mississippi Flyway here in the central states region — first in Minnesota and then a couple of turkey farms in Missouri, one in Arkansas, and then a backyard group of birds in Kansas,” Schmitt explains.

Schmitt says waterfowl carry different types of influenza across the country. “This one here happens to be an H5N2, it’s highly pathogenic, and birds in this flyway as in other flyways, they commingle in the northern countries and they can bring it back. And when they’re coming through they stop, and they can be shedding it in their feces,” Schmitt says.

There have been some samples taken of snowgeese in Iowa and so far the disease has not show up in the state. “That’s pretty exciting, because it means that hopefully everybody is doing their due diligence as far as in protecting their birds,” Schmitt says.

It’s an important issue to Iowa as the state is a leader in egg laying and a leader also in turkey production. Schmitt says he’s confident those industries are taking the proper steps to keep the disease away.

“In the state of Iowa, our commercial operations are very well in tune in as far as biosecurity operations,” according to Schmitt. “Certainly a lot of those have seen what’s going on and have even intensified and reviewed those biosecurity to make sure that it is not introduced into their populations of birds.”

He says the operations have had such biosecurity measures in place long before this outbreak in other states. The operations don’t allow visitors and those who come in cannot have any contact with birds in the last three days, and he says those who work in the facilities are not allow to own their own private birds. Schmitt says anyone who keeps chickens or other birds privately should take precautions.

“If you are walking through areas where wild waterfowl have been and you have a backyard population — its extremely important to change your shoes, make sure things are clean before you walk in with any poultry,” Schmitt says. Schmitt says the influenza cannot be transferred to humans and is not a health concern in that regard.