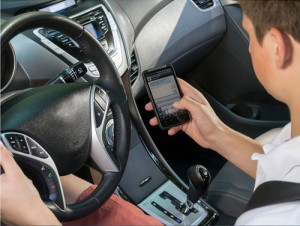 Texting and is one of the biggest distractions for teen drivers.

A University of Iowa study of hundreds of dash-cam video recordings of teenage drivers who were involved in crashes finds they’re a lot more distracted than originally thought.

“We found that six out of 10 moderate-to-severe teen crashes involved distraction, which is four times more than has been reported on police records,” Weinholzer says. “Of course, the average person isn’t going to admit to law enforcement that they were horsing around with other teenagers or talking on their cell phone.”

Researchers at the U-of-I analyzed the six seconds leading up to a crash in nearly 1,700 videos of teen drivers taken from in-vehicle event recorders. “The #1 cause was interacting with one or more teen passengers, that was 15% of all crashes,” Weinholzer says. “Cell phone use, whether it be dialing the phone, talking on the phone, using it to text or something of that nature was 12% of all crashes, and daydreaming and looking around at what was going on outside of the car not relevant to the driving process was about ten percent.”

Other top distractions include: singing and moving to music, grooming and reaching for an object. An earlier federal study had estimated distraction is a factor in only 14-percent of all teen driver crashes.

This new report showed distraction was a factor in 58-percent of all crashes studied, including 89-percent of road-departure crashes and 76-percent of rear-end crashes. Parents play a critical role in preventing distracted driving, according to the motor club. “Parents need to model good behavior,” Weinholzer says. “If their teens are seeing them texting and driving or talking on the cell phone and driving, it’s no surprise that the teens are going to do that themselves. Second, parents need to limit the number of teens in the vehicle as well as the cell phone use that’s going on in the vehicle.”

Those things might be accomplished, she suggests, with parent-teen contracts and through stronger graduated drivers licensing laws. Researchers found that drivers who were using their cell phone had their eyes off the road for an average of 4.1 out of the final 6 seconds leading up to a crash. The researchers also measured reaction times in rear-end crashes and found that teen drivers using a cell phone failed to react more than half of the time before the impact, meaning, they crashed without braking or steering.