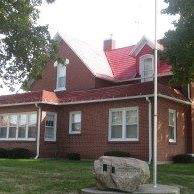 “The General Assembly then adopted her design as the official banner of the State of Iowa on March 29, 1921, ” said Senator Amy Sinclair, a Republican from Allerton who represents the Knoxville area.

The blue, white and red fields on the state flag were chosen by Gebhardt because they are similar to the flag of France, a country that ruled Iowa twice before the territory became a U.S. state. Sinclair found a story quoting Gebhardt, talking about the flag. Gebhardt wrote that the blue symbolized loyalty, the white purity and the red courage. A blue streamer on the flag carried the state motto: ‘Our Liberties We Prize and Our Rights We Will Maintain.’ There’s also a soaring eagle on the design as well as a soldier in a uniform and a plow, the kind that was pulled by a horse.

Saturday’s Iowa Flag Day celebration will center around the Dixie Cornell Gebhardt House which is just south of the downtown square in Knoxville. Events begin at 10 a.m. with a flag-raising ceremony. A history walk is planned in the neighborhood. The Marion County Genealogical Society and the Daughters of the American Revolution will host open houses, too. Dixie Cornell Gebhardt was a state leader in the Daughters of the American Revolution and it took her eight years to collect ideas for the state flag and come up with the final design. Gebhardt died in Knoxville in 1955.