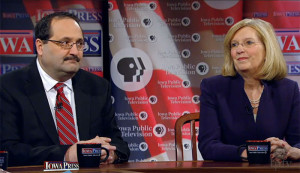 The leaders of Iowa’s two major political parties will soon announce a plan for releasing timely, accurate electronic results of the 2016 Iowa Caucuses.

The precinct caucuses are not elections, but are run by the two parties. The 2012 results from Iowa Republicans were jumbled. Mitt Romney was declared the winner on Caucus Night, by a margin of eight votes, then a few days later when official results were tallied, Rick Santorum was declared the victor by 34 votes.

Jeff Kaufmann was elected chairman of the Iowa GOP this past June and he’s in charge of organizing for the 2016 Caucuses.

“We’re going to learn from our mistakes,” Kaufmann said this morning.

Kaufmann said it’s “exciting news” about the envisioned electronic system for collecting and reporting Caucus results, but he’s not ready to reveal all the details yet.

“There are some other factors involved in that announcement and we have to wait for the timeliness of that,” Kaufmann said. “But we will make believers out of Iowa.”

Andy McGuire was elected chairwoman of the Iowa Democratic Party in January and she also describes the envisioned electronic reporting as “exciting.”

“It’s electronic and wonderful and I think you will really think it’s very accurate,” McGuire said. “It’s timely and certainly will be good for both parties.”

The Iowa Caucuses are scheduled for February 1, 2016 and the two parties will each hold neighborhood gatherings for each of Iowa’s 1684 precincts. While some precincts may consolidate meeting places, McGuire said there will still be hundreds of sites from which results must be collected.

“I don’t think people understand how small they can be and how large they can be and how differing they can be in parts of the state that are more electronic and less electronic,” McGuire said. “It is a large job and we take it very seriously and that’s what we work on it every day. We have a caucus director. That’s her job, every day, to make sure that we have all of those results and we can trust all of those results and we’ve always done well in previous years.”

Democrats engage in far more math on Caucus Night than do Republicans, who merely take a straw poll to measure support for the candidates. Democrats at each caucus site have a “viability test” that calculates which candidates have at least 15 percent support in the room. If a candidate is “non-viable” then his or her supporters must join another candidate’s group. The ultimate Caucus Night calculation determines how many delegates each candidate has secured from each precinct.

McGuire and Kaufmann made their remarks this morning during taping of the “Iowa Press” program which airs tonight on Iowa Public Television.