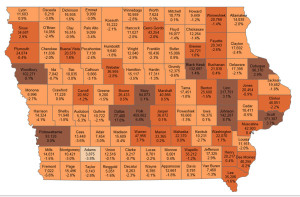 The U.S. Census Bureau released estimates Thursday showing Iowa’s population has increased by two percent since 2010. Gary Krob is the coordinator of the State Data Center program at the State Library.

“What we’re seeing in the state of Iowa is slow and steady growth, and the growth is continuing to be in the metropolitan and micropolitan counties versus some of the rural counties,” Krob says. While the population grew only by about 60,000 in those 4 years, Krob says it is growth and not loss in population.

“We have had slow growth since 1988, so 26 years of growth in our state,” Krob says. “Sometimes I think that gets overlooked when we start looking at some of the smaller communities and people moving out of some of the smaller counties. But the state as whole has actually been growing in population for 28 years.” The Census Bureau says it is Iowa’s longest period of sustained population growth since 1900. The state’s growth continues to be centered around the larger cities.

“We saw growth in 31 counties in Iowa, out of those 31 counties, only one county, Lyon county is not in or adjacent to a metropolitan or micropolitan area. So the growth we are seeing in Iowa is primarily in urban areas,” according to Krob.

“Dallas County was the 17th fastest growing county in the United States this year, it was actually 13th if you look at population in counties with at least 10-thousand people,” Krob explains. Dallas County grew by 17-percent since the 2010 census and added 11,263 residents for a total population of 77,400. More than 58 percent of Iowa residents now live in the state’s twenty-one metropolitan counties, up from over 53 percent after the 2000 census.

Between 2010 and 2014 the numbers show Iowa gained 21,447 residents from other nations. Births, another factor in population growth, were slightly ahead of deaths in the state. Krob says

“State estimates were released last December…and we’re kind of in the middle of the pack when you look at the midwest as a whole. There were states that definitely grew at a faster rate than we did, but there were also states that didn’t grow as much ass we did since 2010,” Krob says.

You can see more on the new population estimates on the State Library’s State Data Center website at: www.iowadatacenter.org.